If you listen to Gus Dapperton’s music, you’d probably imagine its creator to be polite, self-aware, and supremely chill — almost disarmingly so. You would be exactly right.

Dapperton arrived at our interview location, a bright Japanese restaurant he selected in Brooklyn’s famously hip Bushwick neighborhood, exactly on time. He made a point to shake my hand, even though I had my back to the door and hadn’t risen to greet him. Then, in a move I found both strange and endearing, he took the chair next to me instead of sitting across the table.

This guileless charm is the core of Dapperton’s work. Though he’s ambivalent about the oft-used label “bedroom pop,” he said he understands what it’s trying to communicate.

Dapperton’s favored blend of shimmery synths and Beach Boys-worthy guitar licks feels warm and familiar — like a dream you had long ago, or a half-awake heart-to-heart with an old friend. His writing style is reflexively candid, just as he is in real-time.

“I’m comfortable just saying whatever comes to my mind because I know I’m not going to say anything too rude,” he told me over a plate of spicy tuna rolls, chopsticks poised mid-air.

But, as he explained, that comfort was learned — not intrinsic.

“In high school, I was miserably introverted. I didn’t even plan on being a performer and then I kind of had to perform. Over time, I got better at it,” he mused. “Somehow, I came to enjoy it.”

By “had to perform,” Dapperton meant that his passion and talent collided in a way that simply refused to be ignored.

Dapperton, 24, grew up as Brendan Rice in Warwick, a farm-heavy town in upstate New York. He spent most of his time skateboarding and editing videos on his computer, not auditioning for school plays or crooning at talent shows.

“My sister was always a super talented singer, but I wasn’t good. I wasn’t super gifted at the guitar or anything, either. I just dabbled,” he explained. “When you’re young, you’re pushed to do the things that you’re ‘better’ at. But I loved music.”

When Dapperton was in eighth grade, his school’s newly-installed computer lab presented an opportunity. His class was instructed to create a song in GarageBand, and whichever one the teachers liked best would be played on the town’s radio station. Dapperton stayed late after school every day, tinkering away, determined to make sure they picked his.

“Immediately I was like, ‘This is what I want to do for the rest of my life,'” he said.

Dapperton originally envisioned himself as a producer, making beats behind the scenes. But many producers also act as cowriters, and when Dapperton tried his hand at lyricism, something clicked. He began to discover his own voice, both physically and proverbially: “I realized the songs I was writing were meant for me.”

As he developed his unique musical style, Dapperton used different monikers to play with a variety of genres: Spazzy McGee made “old-school hip-hop beats,” Fvcking Digital whipped up electronic remixes, and Pablo Pistachio only worked with classical piano.

Gus Dapperton was the persona behind his official debut single, “Moodna, Once With Grace,” which he released in 2016.

The name suggests a collision of youthful simplicity and stylish panache, allowing the artist to write music that felt true to both his inside and outside. It stuck. 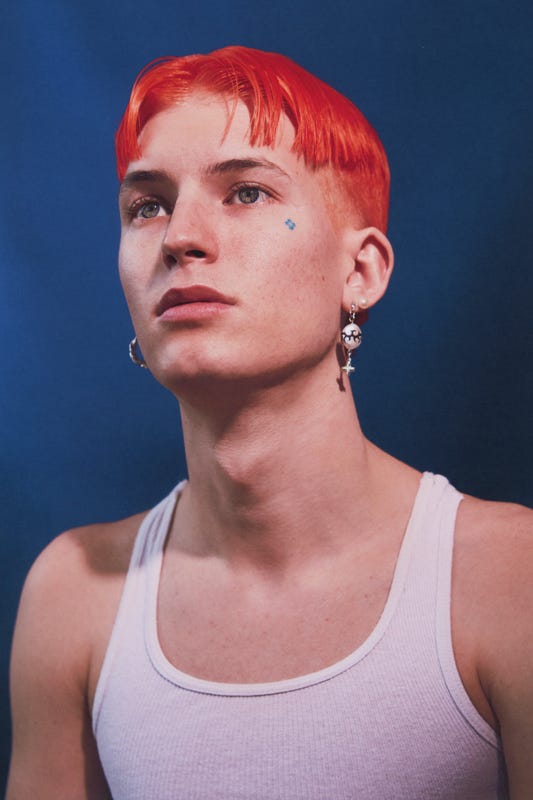 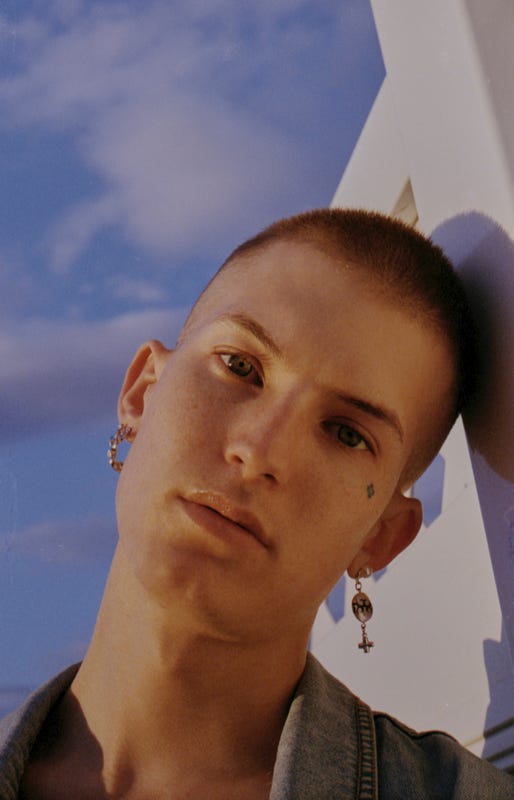 The deluxe edition of “Orca” was released in June.
Jess Farran

Dapperton’s early releases were heavily inspired by artists like Odd Future and King Krule — fellow skater kids who had “weird voices” and no inhibitions — but he also cited supermassive stars like The Beatles, Timbaland, and Britney Spears.

“When I hear my sister sing those big pop songs, it’s impossible to deny how beautiful they sound,” he said. “My family would all be in the car chanting Taylor Swift songs and stuff. I think ‘Love Story’ by Taylor Swift is one of my favorite songs of all time. My dad would just turn up the volume as loud as possible.”

“That’s why I never denied the pleasures of pop music growing up,” he continued.

“I definitely always have the intention of sharing my music and making it for people to enjoy,” he explained. “But I make songs for me, without any outside forces messing with the agenda.”

Although Dapperton was courted by several major labels at the dawn of his career, he knew it wasn’t time to commit to a contract. His music is currently distributed by AWAL, a division of Kobalt Music Group that allows artists to retain majority ownership of their music.

I make songs for me, without any outside forces messing with the agenda.

Superfans anxious for a spillage from Dapperton’s vault will be disappointed. He estimated that he’s sitting on 250 completed songs and “probably 10,000 beats.”

“I make a ton of beats and then just never come back to them,” he said. “Basically, every time I get up to 500 files in Logic,” which is a popular music production platform, “I just get a new computer, because it stops working after that.”

Even more mind-boggling: Dapperton described the bulk of his unreleased songs as catchy ear worms that will never see the light of day.

“When I see myself writing a song to be a hit, I’m like, ‘I just know I’m never going to come back to this again,'” he explained. “I do those things for practice.”

Dapperton revealed he’s made about 40 full songs since the 2020 release of his sophomore studio album, “Orca” — not including the three new tracks on the album’s deluxe version, which was released in early June.

When I cautiously requested a peek into the new musical direction, Dapperton laughed.

“I don’t really answer to anyone, so I can just talk about this,” he said.

Only a small selection of those 40 songs will likely make the final cut, he revealed, but his third album is definitely taking shape. He already has the title decided.

“A couple weeks ago, I had this revelation. I have the vision. I have all the songs’ names,” he said, teasing a “slightly more R&B and jazz-oriented” sound. “It’s not about New York City, but it’s a love letter to my New York City.”

While “Orca” explored the cycle of depression and healing, Dapperton’s forthcoming music will tackle another powerful dualism: love and fear. The two often go hand in hand, but Dapperton is oddly at peace with the turbulence. Contentedness is where he squirms.

“I wrote this poem recently for the intro, and I say this line like, ‘It happens when everything is lost,'” he said. “Sometimes, when I’m so happy, I’m like, ‘Well, I’m not going to make a fucking good song for a while.'”

Dapperton, who has been dating photographer Jess Farran for more than three years, described the new album’s themes as “growing with love, and heartbreak, and time, and being scared of growing old, and growing old with this monotony that’s healthy for you.”

With 2 million monthly listeners on Spotify, nearly 40 million views on YouTube, a show-stopping late-night performance, and a top-40 hit under his belt, it seems absurd that Dapperton has only just begun to feel at home in the “indie darling” conversation — let alone that he’s one of its leading voices.

“I only had about six songs out when we started touring. We had no production, no sound. It was just four of us at the time — my sister, who plays keyboards and sings, and then my bassist and my drummer,” he said. “We’ve played all these big stages and stuff, and it’s taken up until this year’s Lollapalooza for me to feel like I finally belong there.”

“I mean, I feel like I belong playing music for people, but on main stage?” he asked, his voice filled with awe as he noted: “Tyler, the Creator is headlining it later!”

That serendipity had actually struck once before — at a festival in Paris. Dapperton performed mere hours before the former Odd Future ringleader took the same stage.

“It looked like we were just some band off the street that they got, like we were busking or something,” he chuckled. “But this time, I felt like we had everything prepared. I felt so comfortable up there. I was not nervous whatsoever. It was just pure joy.

After playing Atlanta’s Music Midtown festival last month, Dapperton will officially kick off his North American tour on October 17 in Carrboro, North Carolina. And if his sparkly eyeshadow, ever-changing hair colors, and cinematic music videos are any indication, fans are in for a full sensory experience.

“I want to put 100% into all those things. I don’t want to just put 100% into music and then put 0% into everything else that I’m still choosing to immerse myself in. That’s lazy.”